Home   How To   Code Pool   Public Library   Theory   Events
The Document Object Model (DOM) is a standardized set of interfaces for representing XML documents in an object-oriented structure. It can be implemented for any programming language to provide common functionality for handling XML data in programs. The DOM specification is issued by the W3C, see [http://www.w3.org/DOM/].

The conceptual key behind the DOM is its recursive-compositional structure. This means: every part of an XML document is genrally called a „node“. No matter whether the „node“ is an XML tag (like ''), pure text, a comment, CDATA-sections or anything else. Even the whole document itself is called a „node“. This way, the XML document can be described recursively by saying „everything is a node, and may have child-nodes“.

The following UML class-diagram shows the basic interfaces an their relationships specified by the DOM: 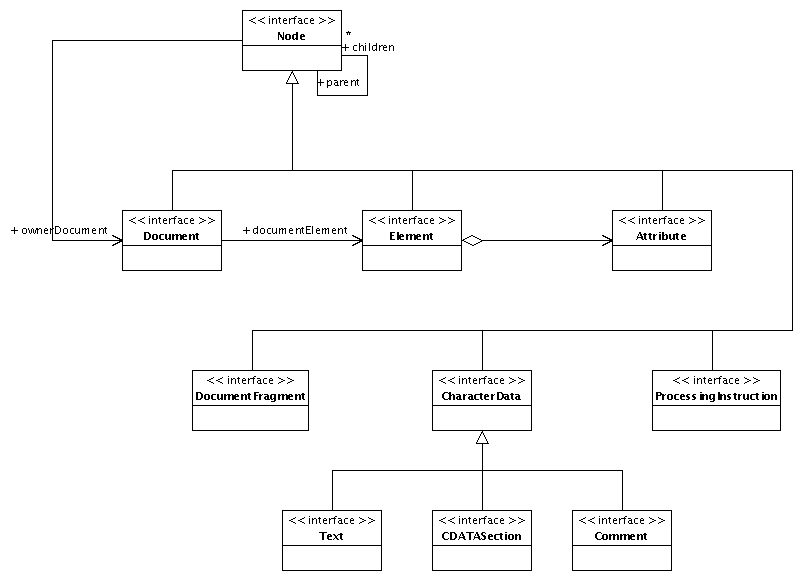 (Note: Such an inheritance structure with a common abstract superclass or interface (here Node) which allows all its instances to be composed of instances of the same common superclass again, is named „Composite-Pattern“ in terms of OOP-design patterns. It is also often found in the models of graphical user interfaces, e.g. Java where „everything is a JComponent, and may have child-JComponents“.)