Home   How To   Code Pool   Public Library   Theory   Events
The Unified Modeling Language (UML) is not a programming language. The word „language“ denotes a set of visual elements in diagrams that describe the overall architecture of object-oriented software.

UML class-diagrams express which classes are there, and which functions and variables they have. There still is a "real" programming language like e.g. SuperCollider or Java to write the actual functions which make the program, saying how the program works. Thus, when e.g. developing SuperCollider programs, UML does not replace the SC-language, instead it embeds the SC-language in visual diagrams.

(Note: Besides class-diagrams, there are other types of diagrams in the UML, but today they are usually not used for programming. Use a search-engine to get a huge mass of documentation on the UML.)

A more complex example than the one above is the XML-parser implementation of the Document Object Model (DOM) for SuperCollider. It can be found on the page XML parsing and formatting - Download.


UML class-diagrams are also called models of the software. Graphical models express the ideas behind the software on a conceptually higher level than raw program code does. This is why this kind of visual programming is called Model-based development.

There are several advantages why to use Model-based development. An individual programmer can benefit from much better code organization through diagrams compared to plain files, and from the automatization of regular tasks of typing, e.g. when creating new classes or new relationships.
When communicating about software among several people, visual diagrams used in Model-based development help to enrich the semantics of the plain program code and thus are enabling to express the subject of discourse on a conceptually higher level. 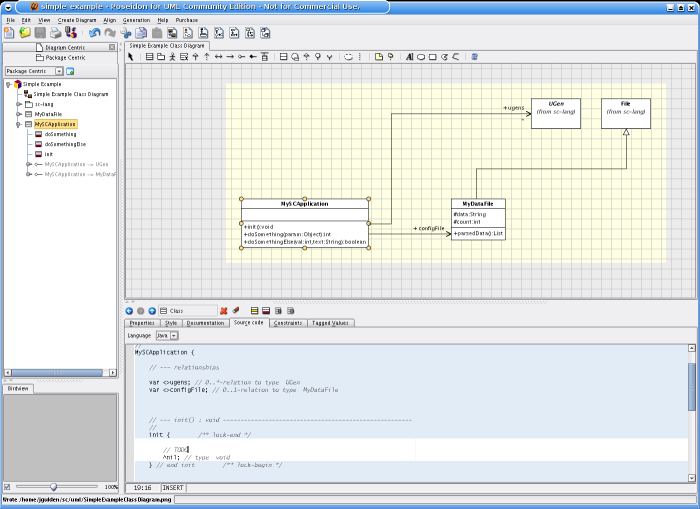 A software-tool has been configured to generate SuperCollider source-files from UML-models, see Developing with the Unified Modeling Language (UML).